Supperclub Summit: Rhineland Rockers with Saffron and Salt: Meatfeast (a.k.a. I ate horse!)

As with all great returns it is important to remake your mark with something a little unusual.  So here we go!

My friend Jenna and I booked ourselves into the above Supperclub event on Saturday August 18th.  Part of the appeal was the German/ South African pairing as well as the idea of a meat feast (I can't help it - I am a proper meat eating Southern African at heart and there are just some things you can NOT change!).  The venue was the Goethe Institut.  It was an inspired venue in terms of location and the room was well placed for its use.  It was a particularly hot evening and it would have been great to have enjoyed the terrace as it took some time to cool down once we had sat down.  There was also a slip of the tongue when we found out we could have been out on the terrace but would have had to move half way through the supper (as the light would go before the light disappeared) but none of us would have minded. 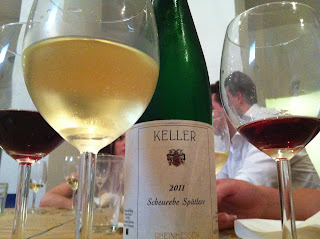 One of my favourite wines of the night!


I did not know much about the featured chefs but found out a little bit here.  The menu was adventurous and there were most certainly a few surprising flavour combinations I had not encountered before.  On arrival we were offered German wine pairings with each course (or buying bottles of what was available) and we opted for the 'wine tour'.  They were all specially selected German wines to complement each course and only cost an addiitonal £22 - a bargain for 7 glasses of wine!  The wine pairings and descriptions below are from Torsten Goffin's blog post and I use them with his permission.

The first if the 7 courses was a charcuterie platter.  It was small and had the effect of an amuse-bouche.  I have to apologise that I did not get a photograph of the dish as I only remembered my mishap as I swallowed my final mouthful!  Oops!.
The wine pairing for this course:
Geheimrat J Riesling Sekt QbA 2008Geheimrat “J” meeting the Geheimrat “G”(oehte) in London.Many Riesling Sparklings tend to lack a special kind of richness. This one does not. Creamy. Full. Rich. Winy. Simply one of the best riesling sparklings I’ve ever tasted.http://www.wegeler.com/


This was followed by Himmel & Aad (apple, potato and black pudding).  Torsten Goffin, one of the chefs,  had really thought about his presentation and  it was great to get a description of each of his dishes.  What stood out about Torsten from the beginning was his personable manner and consistent presence.  The black pudding was 'melt in the mouth' and the small apple cube sweet and perfectly formed!.  The dish, Torsten explained, is usually accompanied by onions but they thought spring onions would be a nice touch - it was.  I think this was the last of Torstens courses but I am not sure.  There were 4 people responsible for the menu and I must apologise for not having noted which courses were accredited to whom.

The wine pairing:
Duett 2011, Sauvignon Blanc-Riesling-Cuvée, MetzgerWe’re celebrating Meatfest, aren’t we?Climate change constantly brings new varieties of grapes to Germany. Sauvignon Blanc is one of the most successful newcomers – especially at Pfalz. Riesling is still the No. 1 over there. Blended together to a very fresh mixture by a newcomer-winery with a great QPR.http://www.weingut-metzger.de/ 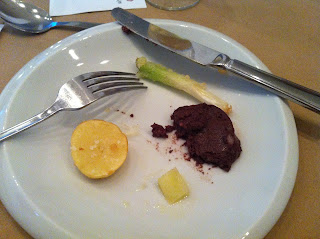 Course 3 was Erbsenparfait & Raucher-Forelle (Pea and mint parfait, smoked trout with a fish and gin consomme!).  I don't like peas and mint but I loved this parfait.  The parfait was had sesame seeds on the outside ( mine did not - allergies) and Jenna said it added extra nuttiness - something I would know nothing about.  I loved, loved, loved, loved the fish and gin consomme.  We were told that it was intended to be sipped after a mouthful of hte parfait and salmon and he was sooo right!  I have to admit though that after the first sip, I saved it till the end then downed the whole lot.  Yummy!

The wine pairing:
Gäns “Alte Reben”, Riesling QbA 2009, LubentiushofSchist, wild yeast, riesling. A perfect match.This is a really great dry riesling from the Mosel. Deep – without being heavy. Vibrant - without being nervous.http://www.lubentiushof.de/ 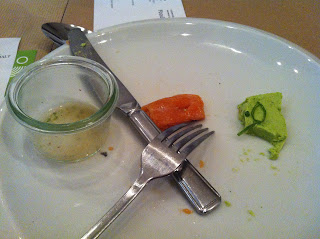 I loved the name of the next course.  "Finkenwerder."  The lovely gentleman, seated by my side, who worked at the Institut was excited about this and said that it was a special and well known dish in Germany - although I can't remember why.  I think it had something to do with the fourth glass of wine...  Thus was also his first supper club and he really was enjoying the experience.  We both agreed that this was better than an ordinary restaurant experience!  :-D.  Oh - "Finkenwerder" = haddock, bacon and shrimp. The haddock completely melted in the mouth!  Phwoaaar!  The bacon was in the form of a bacon flavoured bun to give some texture (and possibly some carbohydrate?!).  I thought this course was great.  You can find out more about Natalie (the chef) here  whilst the recipe can be found  here .

Wine pairing:
Scheurebe Spätlese 2011, Klaus Peter KellerScheurebe - the german answer to Sauvignon Blanc.Very intense wines with remarkably complex aromas. This one is restsüß, which means it has some amount of residual sugar. Nope, not the Blue Nun kind of restsüß. This one is made by the winemaker who also produces the maybe best but definitely most expensive dry riesling of germany – the “G-Max”.http://www.keller-wein.de/ 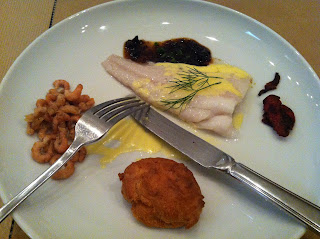 Pork belly crackling and apple sauce accompanied the terrine.  It was also served with chicken liver pate and onion chutney.  A nice little surprise that was not on the menu... I like that!  the pork crackling was really good but several others questioned its pairing with sweet apple sauce.  I personally thought it was fine as the apple sauce had a sharpness that I favoured.  My terrine was different as both the main terrine and the pate contained nuts.  I had the onion chutney and some cheese with my terrine. 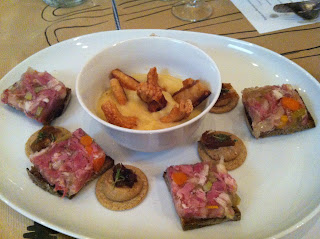 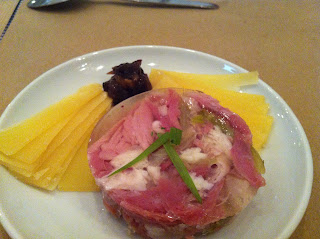 Allergy friendly version of the above.  :-)

The next course was my most difficult to stomach - Sauerbraten-Maultaschle!  The simplest translation = I ate horse!!  I think it would have been fine if I had not known what it was before I ate it!  It was encased in pasta - but it was still horse!  Markus Brendel (a designer by profession, and responsible for this course) reassured me that the meat was from a happy horse and had been well prepared in vinegar and other things for many hours etc...  But it's still horse!  We all had 2 pasta on our plates and I have to say that I ate one.  One other ate none of it, Jenna (one of my best buds) had a single mouthful and other diners appeared to have eaten it all!  If I had to describe the taste I would have to say that there was a sweet, sour taste to it (due to the marinading in vinegar I guess) and it was not too bad.  I was finefor 2 mouthfuls and then the images from years of riding came flooding back!  :-(  I ate horse!!

Despite the contents of the dish I (personally) enjoyed this course for 2 reasons:
1.     It was a great conversation piece and perfect for a supper club experience.
2.     If you cannot push the boundaries and be creatively true to self in your own supper club, then where? 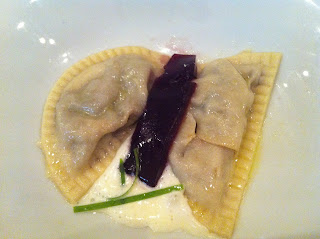 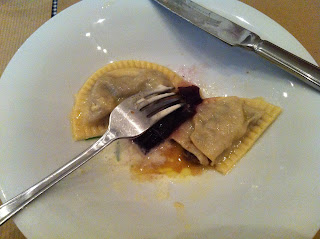 We had pulled goat which I can't remember but Jenna can so I assume that we definitely had it!  (Sorry guys...)
The wine paring:
Schulen Spätburgunder 2008, ZiereisenMade by the “one-man french revolution in german Pinot” (Winerambler)A classic barrique-stored Spätburgunder (a.k.a. Pinot Noir) from Germanys sunniest wine-region: Baden from PN-Shootingstar Hanspeter Ziereisen.http://www.weingut-ziereisen.de/

To end the evening we had Schwarzwalder Kirsch (Black Forest Gateau).  It was the lightest gateau either of us had ever had.  It was not too sweet, not too chocolatey and not too creamy!  It went down very well and was demolished in no time at all.  It was the perfect ending to the meal.

Wine pairing:
Bopparder Hamm Feuerlay Riesling Auslese 2011The sweet final.Comming from the core of Rhine Romanticism: Rhine Gorge (Mittelrhein). And from one of the most talented winemakers there: Florian Weingart.http://www.wegeler.com/ 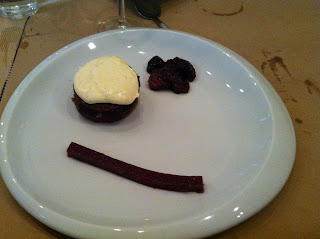 Schwarzwalder Kirsch.  Now you see it... 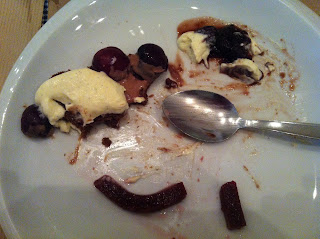 Now you almost missed it!

Overall I would highly recommend a visit to any of the supper clubs of the above should you find yourself in Germany.  The food was great and the atmosphere upbeat and casual with some great conversations.  I really enjoyed chatting to and meeting all the chefs, as well as the Supperclub Summit organiser - you guys did an awesome job and look forward to the summit in 2013?

Daxie
Me in a nutshell? Simple, uncomplicated but always ready for an adventure - what you see is who I am. Welcome to my blog.